Tricky Disco crew member Christophe - one of Bristol's finest DJs, charity shop crate digger supreme, hardcore party animal and graphic designer to the stars - has launched his own blog. It's Called Love Tempo and it's rather good. For starters it features a hot array of mixes from Chris himself, which are always essential downloads. His latest mix is particularly good. There's also some mixes from Futureboogie/Seen leg end Joe 90.

Head over there by clicking here >>
Posted by Sell By Dave at 12:17 No comments: 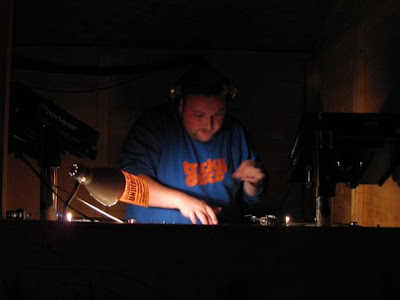 It wouldn't be Christmas at TD Towers without the obligatory "Seasonal Selection" from yours truly. These mixes tend to feature no Christmas-specific music of any description, instead offering a mix of the new and old, forthcoming bits and the odd unreleased gem. This year's effort is no exception. Like last year's mix, it was put together pretty much on the spot with no forward planning. Hopefully it feels a bit spontaneous - that's the idea.

Tracklist wise, it boasts a mix of some of my recent faves - The Revenge, that Aeroplane mix of Friendly Fires, Downtown Party Network – some classics (Metro Area, Pet Shop Boys, Kelley Polar) – and a heavy dollop of unreleased/forthcoming fare. Look out in particular for the soon-to-be-hyped Beyond The Wizard's Sleeve version of Franz Ferdinand, Mungolian Jet Set's rejected remix of Tough Alliance (never to be released, the Mungs tell us) and a cheeky dab of deep disco house from Ron Basejam's 2009 solo debut. Stylistically there's chugging slo-mo house, nudisco, Italo-pop and more besides. Hopefully you'll find it entertaining - I had fun drunkenly putting it together.

Apologies to those who've been loitering around here recently, only to be met with the same content we uploaded back in October. This time we have an excellent excuse - Team TD were down in Australia sunning ourselves, playing records (thanks to Neil at A Disco Stole My Baby in Sydney) and generally enjoying life on the other side of the world. Now we're back and intend to make up for it over coming weeks with a hot selection of mixes, articles, opinion, interviews and random nonsense. Business as usual, then.

Since our arrival back on British shores, the weather has been irritatingly cold and frosty – so much so, in fact, that we've taken to wearing thick orange Arran sweaters, wooly socks and those middle aged slippers they flog in M&S. Don't judge us - it's a practical thing.

Luckily, we've found a few musical gems lately that have warmed us like a steaming mug of mulled wine. Perhaps most worthy of praise is Moonboots & Balearic Mike's 'Originals' comp on Mudd's Claremont 56 label. We've always been big fans of Mudd (inviting him down to play at our party in a boozer last year, playing his records, telling everyone what a thoroughly nice chap he is etc), Moon and Mike, and 'Originals' really is a marriage made in heaven. A proper CD comp (which, incidentally, is also available digitally 'for tha kids'), it features a heart-warming selection of quality Bally-eric tuneage hand-picked by Manchester's finest vinyl-hoarding dad DJs. We have to admit to being a bit clueless when it comes to the origin of most of the material – a mix of long-forgotten Balearic fodder and new material – but we can tell you it's a fantastic selection. It's delightfully eclectic, moving from dubby sunset Balearica (Band Aid's 'A Tour In Italy') and off-kilter electronic European pop (Byron's 'Too Much', the ecentric Italian stylings of Radio Band's 'Radio Rap') to piano-tastic 80s grooves ('Dance' by The Night S-Press), spooky late night fare (Bdum Bdum Sound) and lilting acoustica (Mountaineer, 5th National, Smith & Mudd). Although largely downtempo, it's about as far from 'standard' chill out fodder as you can get – honestly, it's an essential purchase in our eyes. Head over to the Claremont 56 website to buy a CD >>. There are only 800 available, so act fast!

Also wholeheartedly warming our cockles this month is the latest collection from the DJHistory camp - that's renowned writers Bill Brewster and Frank Broughton. The duo have been putting out some good digital-only fare lately - the SWAG best-off, for starters - but their latest venture is easily their best comp yet. 'Le Disco - Tele Music Remixed' rescues a load of old library music by some of French disco's best players and gets it touched up for modern discoid dancefloors. This basically means re-edits - and the odd 'proper' remix - of exceedingly obscure, little-heard disco tuneage by the likes of the Idjuts, Faze Action, Toby Tobias, Ray Mang, Al Kent, Mudd and the Unabombers. It's got to be hot, right? Yep. From what we can gather the majority of the edits are pretty reverential, with contributors simply rearranging the excellent source material with the odd dancefloor tweak. It's an approach that pays dividends, with each of the ten edits feeling both authentically swinging and deliciously playable. Being Brewster and Broughton, you also get a PDF boasting full sleeve notes, a history of Tele Music's players (many better known for things like Voyage, Cerrone and Arpydys) and a load of information you never knew about French disco. Yes, it's download only, but at 8 quid for 320 MP3s or 9 quid for the WAVs, you can't argue. Heartily recommended. If you're interested in downloading it for yourself, soundclips and such are available at DJHistory.com >>

We've also been getting our long johns in a twist about the most recent Aeroplane material (but, hey, who hasn't?) and the forthcoming solo effort from Ron Basejam, AKA Crazy P's Jim Baron. As far as we know Jim's not found a home for it yet, though talks are underway. We hope it finds a home, as it really is rather lovely - a frostbite-slaying mixture of groovesome discofunk, deep house and fireside dancefloor grooves. It's called 'Deep & Meaningless' - look out for it in the Spring.

Right, best dash. Expect some new mixes very soon, including the first ever Thumbs Aloft mixtappe and a seasonal selection from that pesky bearded chump Sell By Dave. Yowzers!
Posted by Sell By Dave at 17:04 No comments: