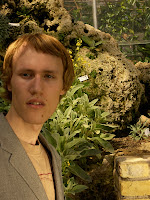 We're not known for our love of all things jazzual and goatee-sporting here at Tricky Towers, but we nevertheless have a lot of love for the work of Andreas Saag, AKA Swell Session. The Swede has released a fair few gems over the years, most noatbly the sweet broken beats of 'Falling Into' and deliciously deep 'Bringing Me Down' (the latter of which came with a lovely vintage house rub) – both under the Stateless moniker on Jimpster's Freerange label.

Over the last few years, though, we've heard very little from the man from Gothenberg, other than the odd remix here and there. In our frequent conversations with Jimpster we've been assured that Andreas was doing fine and his new album was almost ready, but we have to admit we had doubts – in fact, we were convinced he'd jacked in the production and was instead working for IKEA designing a lovely range of comfy studio furniture.

It turns out that Andreas was indeed spending his time locked away in the studio – or, to be exact, a whole host of studios around the world. The result is new album 'Swell Communications', a collection of 12 collaborations with producers, singers and musicians around the world. If you like your beats jazzy and broken, bassy and futuristic, or even plain old solid and 4/4, there'll be something in there for you. The forthcoming remixes EP – featuring a life-affirming Charles Webster mix of 'All Of Me' – is, if anything, even better.

We were intrigued by 'Swell Communications' so decided to set up a little phone interview with Andreas. Here's how it went…

Tricky Disco: So, how did the idea for ‘Swell Comminications’ first come about?

Andreas: “I guess the idea first came about because I’d been listening to a lot of music from around the world. Living in Sweden I’m so far away from London and all the other places the music I’m into is made. When I started getting recognition for my music, it gave me the opportunity to finally meet other producers and musicians from Europe and Japan.I found not just that they were good people, but that they were really open and many of them became my friends. So I thought maybe I should get together with them musically. Then it started to grow.”

TD: The album features a real “who’s who” of the more broken, jazz-influenced end of the dance music spectrum – the likes of Domu, Seiji, Mr Scruff, Lyric L, Simbad, Mark De Clive-Lowe, Landslide, Nuspirit Helsinki, Jimpster, Capitol A, Earl Zinger, Elsa Esmerelda, Noah, Paul Mac Innes and your old pal Ernesto. Musically this means it’s quite diverse, but it holds together very well. Is it a different album than you’d have made if you’d sat down in the studio on your own?

Andreas: “Absolutely. From the start I thought I should try to hold it together, but there were so many crazy things happening. For example, when I did the track with Simbad he siad he’d get this MC I really liked to do one of the tracks. It turned out that there were actually two completely different MCs turning up, these two girls from Brixton. It was great, but at that point I understood that I had no control over it and just had to see what came out of it. That was a great turning point for me, because until then I’d been worried it would become kind of too diverse. I had to let go of that, because it wasn’t helping the album come together. As soon as I loosened up and took everything as it came, then it started to become interesting. I did worry about the diversity, but it turned out well.”
TD: It took you a long time to record the album – nearly four years. Was it a difficult process?

Andreas: “More time-consuming than difficult I think. A lot of the collaborations – about 80% of them – I went to somebody’s studio, they came to mine or I recorded a saxophone on the street in Tokyo and made a track out of that. I think it would have been pretty pointless if I was just sending tracks and parts back and forth. So I definitely wanted to go in the studio with people, which is what I did except for two tracks. For example, I went to visit Mr Scruff in Manchester. I stayed there for one day and we did some stuff in the studio. I then went back to Gothenberg and laid down some vocals, sent the track back to him and then it went back and forth.”

TD: On your website there are video clips of some of the studio sessions and recordings, which have been made into a small film for the CD release. Is this film an integral part of the whole ‘Swell Communications’ project?

Andreas: “For me, it’s almost as important as the album. Normally on an album a ‘making of’ film would be a bonus, but since the whole project’s about creating stuff together with people you’ve just recently met, and the tension and funny moments that come with that, then it’s a vital part. I think you should listen to the album first – it holds together as a musical journey, but if you watch the videos afterwards I think you get the whole concept.”
TD: Is the ‘Swell Communications’ collaborative process an excercise you would repeat, or do you think ‘I’ve done that’?

Andreas: “I’d definitely do it again, but I would know this time how to get things moving. I would definitely have a deadline that everybody would have accepted from the beginning. This time, a lot of the people I was working with, they didn’t do this for the money or something, they were kind enough to let me into their studios so I didn’t feel I could call them up and ask them for whatever they were going to send me. This has been a long process because of that, but I’d definitely do it again – especially when I hear the results.”

Andreas’s ‘Swell Communications’ album is out now on Freerange. You can check out footage of the recording sessions at www.swellsession.org
Posted by Sell By Dave at 13:34 No comments:

Just a quickie - thought it was about time we posted some aural excitement to ease your eardrums. It comes in the form of an "on the fly" mix myself and comrade Sean Kelly put together over a few bears in the Tricky Kitchen. 80 minutes f mixed-up musical goodness, from dub disco and Scandolearica to acid house, hip-house and old skool electro, with a few surprises thrown in. There's also an unreleased exclusive in the form of the brilliant 'Clairevoyage [A Medley By The 16th Rebels Of Mung]', an epic 12-minute odd remix collaboration between Lindstrom and Mungolian Jetset. Stellar stuff!