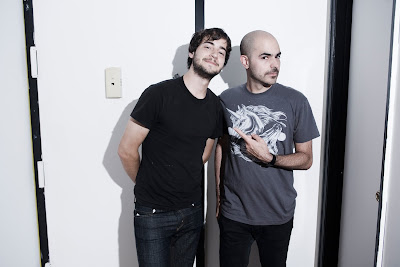 Back in January, Tricky Disco headed to New York City for a frenzied weekend running around the Big Apple, meeting as many DJs and producers as possible. Our task was to investigate the state of the NYC disco scene, which many had said was undergoing something of a renaissance thanks to the likes of Hercules and Love Affair. Whether it is or not is open to much debate - views differ amongst the small disco community in NYC, for starters - but that's for another day. While we were there, we called in on Wurst Edits chief My Cousin Roy. Hanging out in his Lower East Side apartment, we were surprised to come across one Jacques Renault, sometime DJ partner of DFA Records' Justin Miller, building a set of shelves in Roy's bedroom-come-studio. We exchanged edits CDs, and Jacques filled us in on his forthcoming releases. We thought little of it, until a few months later Rekids sent us a sneaky upfront CD of a piano-heavy house track called 'Brooklyn Club Jam' by Runaway - Jacuqes and studio buddy Marcos Cabral.

Since then, 'Brooklyn Cub Jam' has become a bit of a slow-burn anthem. It's finally out on DFA and Rekids (the former licensing it off the latter and getting new mixes from Brennan Green and others). To celebrate this fact, we thought it was about time we got Jacuqes and Marcos to do us a mix… and answer some questions. So they have, putting us together an exclusive live house mix-up (with the odd dash of disco and techno). We're grateful for them for doing it for us (and especially Hacques for answering our inane questions), as soon they'll have pretty much no spare time - check the interview below for details of all of their forthcoming projects. Incidentally, there's no tracklist for the mix, but expect a blend of European and US house old and new, with a distinct dubby finish and more than a nod and a wink to disco.

So chaps, how's life in New York? It looks like you're the busiest men in the world right now, with umpteen gigs a week, numerous records on the go, remixes etc etc. Do you ever find time to sleep?
"Yes, we've been busy and working on a lot of music for the past year so we're happy to see everything coming out! New York this time of year is fantastic. Summer's over so everyone's back and doing stuff in the city. There's some new spots in the city and it's hard to leave New York but we're planning trips abroad and looking forward to it!

Most of our readers will know little about Runaway, though may have heard 'Brooklyn Club Jam' and your edits on Wurst. How did you guys first get together and what inspired you to head into the studio?
"We met early 2000 @ Marcos' record store, Sonic Groove (R.I.P.). We've always had similar tastes in the new and the old, even had a club night together on different floors. I knew Marcos was familiar in the studio as he had a few releases on Trapez, so when I switch from Protools to Ableton Live I asked him to come over and show me a few tricks. We made a few tracks together and our Wurst release was born. We've been working together since.

You hold various DJ residencies around New York, and seem to play almost twice-weekly. If we were to head over to NYC right now and check out one of your sets, what would we be likely to hear? What's inspiring you musically right now?
"There's no room for sleepers in New York. You'll hear us mixing up Disco and House, classics and the new, and nothing too dark to scare the anyone away. Good times party music, that's why we play all the time in New York and abroad. That's the inspiration, going elsewhere and seeing how other cities react and taking that with you back to New York. It works out quite well."

You both have quite different musical histories and inspirations… is that the key to the success of Runaway? How does it manifest itself in the studio?
"Yes, exactly Marcos comes from a freestyle/chicago house/techno background as I come from a classical / post-punk / disco background. We work really well together, bringing different sounds and ideas in to the studio. We like the same feeling / vibe so it works. We're hearing different things and consistantly surprise each other in the studio. It's been productive and a lot of fun."

Easily your biggest tune so far has been 'Broooklyn Club Jam', which treads a far housier – and, specifically, typically mid-90s NYC – path than the disco that you were initially known for. So are you really feeling house right now? What inspired you to make a heavy tune like that?
"We love house, we love disco, we love big room tunes too. We make them all. I remember the afternoon we made that track very well. It was last summer on a Saturday afternoon. We were feeling great and we're like "let's make a big tune." we got working quick with a few ideas and "Brooklyn Club Jam" was born."

Rather shamelessly, we love pianos in house music – and the pianos in 'Brooklyn Club Jam' are sweet. How do you feel about pianos in house? Should the revival start here or should house pianos be consigned to history?
"Are you kidding? Pianos will NOT rest. We're happy to join the resurgence of piano house!"

You seem to have a lot of releases in the pipeline. What can we expect musically from Runaway in the next six months?
""Brooklyn Club Jam" will be out on DFA with a Brennan Green mix in October, followed by "Putting in the Overtime" on I'm A Cliche, our 2nd release on Cosmo Vitelli's label. We've got a new Chinatown 12", another Wurst 12", and remixes for the upcoming Confuzed Techno series on Mantra Vibes, Jackpot on Service/Permanent Vacation and LCD Soundsystem for 45:33. Early next year you'll see our official "New York Disco" mix CD for Rekids."

This tune you've got coming up on Chinatown… that sounds interesting.What can we expect from that?
"It's a great track called "Alberg 30" with Brennan Green's version on the flip called "Alberto Triente." It's very "special" and we're happy to join the Chinatown roster with that one :)."

We're also excited about this mix CD for Rekids. What can we expect to hear?
"The mix CD is going to be a taste of what Marcos & I have been playing along with some personal favourites so it will have some classic NYC disco, house, techno and some new jams too."

You seem to be an integral part of the DFA crew these days, DJing with the guys and even releasing records on the label. Do you think you'll put out more material on DFA in future?
"Yes, for sure. Marcos & I have been working on tracks for our labels and it's only a matter to find the proper home for the music. We're working on something special for DFA too."

Speaking of DFA, we see you've remixed '45.33'. When the hell are those mixes coming out? We've been waiting so long we've actually wet our pants!
"Yeah, it's been a big project but it will be well worth the wait! Hopefully in early 2009."

It would be wouldn't be an interview with a UK blog if we didn't ask you a bit about what's happening in New York right now. From the outside there seems to be a buzz about disco again. Is this a fair summary, or are we getting over-excited again?
"It's totally fair, as New York has some great talent these days doing things and making it special. You can tell there's a buzz all over the city as you hear it more and more in the places you love and then the places you wouldn't even expect."

Listening to some of your forthcoming material, there seems to be a real space and dubbiness to proceedings, and a sound which seems to fuse elements of disco, house and techno. Are you both heavily inspired by dubbier forms of dance music?
"Dub is a big influence indeed; in the music we make and the music we play."

Do you like to make your DJ sets equally dubby? That's a real NYC trait…
|You can definitely hear our influence in our sets. We like to use added effects and get playful with the EQs to keep it fun and interesting."

Is there anything else you'd like to tell us?
"2009 is looking good, expect to hear a lot more Runaway!"
Posted by Sell By Dave at 10:40 No comments:

We haven't treated the TD faithful to a new mix for a while, so we thought we'd share this one we were given from fast-rising Bristol duo VAST & BULBOUS.

The pair are residents and promoters at I FEEL SPACE, a student-friendly disco, Italo and cosmic party that takes place at our regular best before: base, The Bank. They've also thrown parties at Native and will soon be making their debut at Timbuk2, with a Thursday night bash later this month.

This promo mix for I Feel Space boasts a bunch of their fave tracks, taking in DFA style disco wonk, Italo, electrofunk, classic disco, lo-slung electro, tech-house and even the odd bit of Yes. It's good fun and well worth a listen. Enjoy!