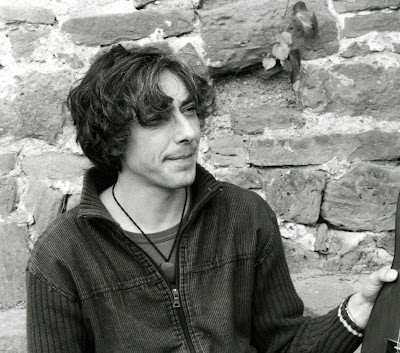 For a man who’s released some wonderful techno records over the last few years, Heidelberg’s David Moufang isn’t all that positive about the way the sound is heading. “Techno isn't very exciting to me these days, as to me it lacks depth,” he sighs. “It sounds to me like music just being made for purposes. This is why I and many others seem to be rediscovering deep house. You may argue that the substantial deep house records were made about 20 years ago, but my point is that there is substantial deep house coming out right now – Underground Quality, Workshop and Sistrum to drop a few names.”

Moufang has always appreciated music with depth and melody, so it’s no surprise that he’s finding techno’s current obsession with the abstract and linear tough to hande. Those who’ve followed his near 20-year career celebrate him as a producer with a keen ear for soul and melody, even if few of his productions could be categorized as ‘soulful’ (not in the conventional sense, at least). If it’s emotion-rich electronic music you’re after, then Move D productions will certainly be right up your street.

“To me music only matters if it is emotionally involving,” he states. “From Bach over Monk to Larry Heard, Underground Resistance and Squarepusher, music has to touch me emotionally – maybe that's why I never really got into minimal techno as they do it today - the true minimal techno was done over 15 yeras ago by people like Rob Hood and Sähkö. This music also had emotional value - I don't want to get personal, but i don't hear this in most of today's mnimal stuff.”

Moufang’s love of emotion-rich music manifests itself in the way he makes music, particularly in his use of certain chord structures and sound sets. “Harmonically I have some preferences which prevail through most of my stuff,” he muses. “Clearly rather minor than major, looking for slick, yet unpredictable chords, progressions and arrangements. So even if I explore different styles, I hope that all my work features some of the same qualities like depth, space and colour.”

Moufang has never been one for pigeonholing, and has enjoyed a career as varied as you’d epxect for someone with nearly 25 years experience in music. He started off playing in bands in the early 80s, before taking up DJing in 1987. Since then he has achieved so much – largely to little widespread acclaim – making everything from ambient dub to slinky house via IDM, spacious deepness, electro and jackin’ dancefloor fare. Hell, there was even an 80s disco-influenced outing for Compost Black Label.

“Throughout this time there have been a few moments where I felt that a change is imminent,” he reflects. “Most clearly when I started to get into house and techno. On the one hand I felt a big excitement, but a lot of it was caused by the techno scene as a movement and the changes it brought in social, cultural, clubbing and even political aspects. On the other hand there was a sense of great new musical freedom, which I had been dying for after 80s dance music – especially R&B and hip hop – had become so formulated. It was very clear to me that there was a great potential for stuff that hadn’t been done – this is why Jonas Grossmann and I started the Source Records label and made us confident that we would have something of value to add to the whole.”

Moufang and Grossmann forged a reputation as purveyors of dubby ambient, IDM and electronica as Deep Space Network, using Source as a way of releasing similarly interesting electronic music in the early 90s. “The early 90s were a very good point in time to be there at the forefront, helping shape the future," he enthuses. “After all this time i think that we actually succeeded and there are a number of releases on our label which laid out blueprints for later explorations – albums like 'Electronic Congress', 'Sato Yumiko', 'earth II infintiy', 'kunststoff', 'Kobat', 'Live&Final fridge', 'Conjoint', 'Personal_Rock' and 'Sad Rockets'.”

With such a vast and varied discography behind him – including releases on Warp, Modern Love, Philpot and Plus8, amongst others – you’d expect Moufang to be a touch world-weary, and certainly not as fired-up and excited about the future as he is. “Today I still get excited about good music and probably there have never been better times for finding good electronic music - despite the state of the industry," he chirps. “There is so much good and diverse stuff out there – it seems that nearly everything has been done or at least tried by now. These days my motivation rather lies in redefining than revolutionizing music.”

Moufang is certainly trying his hardest, and recent years have seen a spate of quality releases. For all his talk of finding techno boring, his releases on Modern Love – ‘Drane’ and “Ac1d’ – are both superb examples of pulsing, sparse modern techno. Yet it’s his more deep house flavoured releases – some of which should probably be classed as tech-house – that have been most impressive. It’s almost as if he’s taken the best aspects of European techno – the pulse, the space – and added a touch of much-needed soul and emotion. His new 12” on Shanti, ‘Between Us’ (featuring the wonderful ‘Lush Summer Rain’) is a particularly good example of this.

Yet despite this deep house success, Moufang has no plans to limit himself in future. “Music to me is all about variety – be it as a DJ or a producer. I would not be happy to do just one thing and I often get bored when I am out and I hear a DJ who is playing one single style all night. Recording artists that I admire have the power to reinvent themselves – like Miles Davis, The Beatles, Talk Talk and Richard D James.”

Move D – ‘Kunstsoff’ (City Centre Offices)
“I think it seems to stand the test of time and some of it still sounds as if it had been done tomorrow rather than yesterday.”

Reagenz – ‘Reagenz’ (Source Records)
“This was the first time that I enjoyed a collaboration as a fruitful realtime live improvisation. It was with Jonah Sharp.”

Conjoint – 'Berger/Kodge/Moufang/Ruit' (KM2)
“Because of the dialogue of the generations - it was a blessing to work with such experienced and gifted players and composers like Karl Berger and the others.” 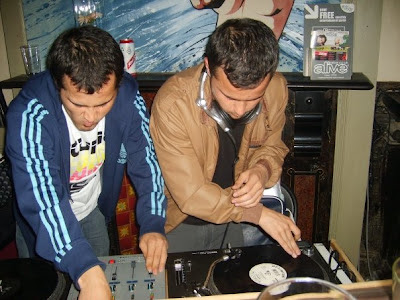 We've got a bit of a treat for you today in the shape of a brand new bodypoppin' old skool mix from our very own turntable robots, The Kelly Twins. Those who've heard any of their sets in Bristol (where they are residents at best before: and Byte, as well as running their own UFO bash) Plymouth or at Dulo in Sheffield last Saturday will know what to expect - a booming selection of shit-hot old skool tuneage masterfully mixed. Sean and Dan are not known as "the robots" for nothing.

So here it is: their very first old-skool mix up: Two DJs, two turntables, one mixer, recorded live to disk in the old skool manner. No edits or overdubs - the recording is as it was when they recorded it. Yours truly was on hand to witness the recording and there was a great flow and vibe. The resultant mix is fantastic - a proper journey through old skool electro, P-funk, Miami bass, freestyle, electrofunk, 80s funk, synth-pop and gawd knows what else. Enjoy!

THE KELLY TWINS: SAY NO TO CRACK (AKA GALACTIC JAMS)

Download The Kelly Twins 'Say No To Crack' Mix >>