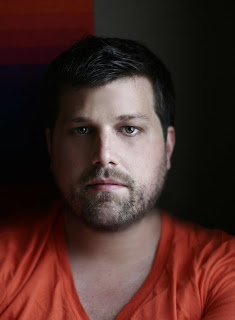 Last year’s debut Hatchback single, ‘White Diamond’, was undoubtedly one of our favourite singles of 2007. Like mate Dan Judd (best known as Sorcerer), Samuel Milton Grawe makes magical music – star-gazing instrumentals that owe as much to Neu! and David Axelrod as they do to obscure electronic disco and classic European prog rock. With a debut album set to drop in September on Lo Recordings, we thought it was about time we caught up with the man Hatchback…

TD: So Sam, what first inspired you to make music? We’re guessing you were playing around with sound long before ‘White Diamond’ came out…
SMG: “Well I’ve been making music for a long time – since I was 14 years old maybe. I’ve always loved music and at an early age, the first time I saw a synthesizer I was fascinated by it. That was when I was maybe five or six, and that was a little Casio. Since then I’ve always loved music. I always loved listening to tapes in my Walkman. I traveled a lot as a kid and that was the thing that you had with you. At high school I really got into progressive rock like Yes and Pink Floyd, and I started making music like that on keyboards and on the computer. After that I got into stuff like Tortoise and Stereolab and Future Sound of London, and started digging more electronic music. Since then I’ve steadily been plugging away making music that sounds good to me. I have influences in the thousands and there’s no one thing. I think you’ll hear it if you listen to the album. There’s not one thing I’m going for, more so I feel like every track is its own little world.I like the way that if you listen to a later Beatles track, every song has its own production universe and sound that they’re going for. That really interests me. Artists now with the way labels are, their albums will have a “hit song” and the rest of the album tries to sound like that. I love those kinds of records where every song sounds a little different, like Simon and Garfunkel or the Beatles, so that’s kind of one thing that influenced me.”

TD: The first track we heard of yours was of course ‘White Diamond’, which was a revelation when it first came out last year. It seemed to fit in with the Balearic/cosmic mood of the moment, despite – we’re guessing – not being directly influenced by either…
SMG: “As far as ‘White Diamond’ goes, I wasn’t trying to do something Italo or Balearic – I’d just been watching the movie ‘The White Diamond’ and I was trying to make a kind of floaty new age track. That’s what happened…”

TD: Lets talk a bit about your debut album, ‘Colors Of The Sun’. Although it’s pretty varied and takes in a lot of influences, it hangs together particularly well. We’d say that was down to the distinct atmosphere you seem to generate. The same could be said for your material with Dan Judd as Windsurf. Does Dan have similar influences to you?
SMG: “Dan I always think of as the Jackson Five, hip hop and R&B music from the 80s, and I’m Pink Floyd and Krautrock, and somewhere in the middle we meet. I think those are the things he came to earlier in life. I love those things now, and he loves krautrock and progressive rock. That was definitely what I was nto when I was 14, 15, and I appreciate a lot more now. We just came from different places to be in the same place.”

TD: We hear from Prins Thomas that there’s a Windsurf album due very soon on Internasjonal?
SMG: “Yes, it’s done. We’re waiting. It’s due any minute.”

TD: That’s Norwegians for you. Mind you, you guys are in California, which is a pretty laidback pace itself…
SMG: “Well, we both have jobs and we do other stuff, so we’re just happy it’s happening. In a way we’re both waiting for albums to come out. The Hatchback album represents maybe two and half years of tracks I made for myself long before there was talk of an album. So if it comes out next month or the month after it doesn’t matter, we’ll just keep making more tracks.”

TD: Do you think being based in California has any influence on the kind of music you’re making? California does have a musical history that includes both quite freaky psychedelic sounds and really laidback stuff…
SMG: “I think that it has. It’s not an everyday thing when you’re living in a city and just farting around, but there’s a natural influence, maybe more so than musical. An influence of driving North along the coast. I forget, having been here for ten years, how mind-numbingly beautiful it is. That kind of space, that environment, has had a profound influence on me as a whole. Both Dan and I have traveled together – we’ve been down to Mexico and other places in California – and those experiences are always fun. They always refresh us. Whenever we’ve come back from Mexico we’ve always made great music, because you still have that vibe in your mind.”

TD: I have to admit that when I first listened to ‘Colors Of The Sun’ I had this image of you and Dan driving round California in a clapped-out old bus, Ken Kesey style…
SMG: “I wish! I definitely have hippy commune dreams. I wish I lived in a geometric dome and raised goats! Maybe one day if I sell enough copies of the album!”

TD: Musically, although there are strong electronic influences, ‘Colors Of The Sun’ is not a dance record by any means, but those getting into yours and Dan’s music are primarily DJs and clubbers. Do you find that odd at all?
SMG: “I don’t know. We’re definitely not DJs – I don’t think either of us know how to beatmatch. There are things about that kind of music that we like. We’re certainly making some form of electronic music, it’s not necessarily club music though. DJs in general, and hip-hop DJs… I’m always amused that Dr Dre found some sample from David Axelrod. It’s strange to think of him listening to those 1960s records to find that sample. With DJs it’s the same. Prins Thomas, for example – he owns thousands and thousands of records, I’m sure he doesn’t just listen to club tracks at home.”

TD: One of the things that’s interesting about [Prins] Thomas and Hans-Peter Lindstrom is that although their influences are different to yours, they’re very much into interesting 70s synthesizer music and progressive rock - which is a trait shared by quite a few of the Norwegian ‘space disco’ producers. It seems strange that there are these parallel scenes going on across the other side of the world where people are influenced by similarly odd things, and the music that results shares some similar atmospherics and characteristics…
SMG: “There was an interview for a local newspaper here that talked about the Norway-Bay Area connection, because there are a couple of other artists here – ARP and Dominique Leone – who are signed to Norwegian labels. I don’t know why – maybe it’s because we both have West Coasts, maybe it’s because watching the sunset over the ocean is profound. I could have something to do with the environment.”

TD: You traveled around a lot with your parents when you were young. You must have had some amazing experiences you on your travels - at such a young age - which shaped your outlook and opened you up to different types of music…
SMG: “Yeah. One thing that I always loved was film soundtracks. My parents were really into Abba and the Eurhythmics for some reason. Obviously I was exposed to a lot of Indian music and different sounds and places. I saw a lot of the world. It’s a special experience – it’s not journalistic. I can’t just recall all the places I went, but there are still times when you smell something or hear something and it brings back memories. There’s something about music and smells that brings back experiences. Sometimes you try and get a vibe where it’s recreating something from that.”

TD: You like to get a cinematic feel to your music, and when it works – as we’d argue it does on ‘Colors Of The Sun’ – it allows people to imagine whatever they want really. It might conjure up certain images for them, but it will be different for every person…
SMG: “Exactly! In a way it’s a shame you have to put titles on songs, because it should be that everyone can title it for themselves. I kind of think of it as a soundtrack for what I’m doing – riding the train to work, or driving my car at weekends, whatever it is. Before I was releasing records, that’s what the purpose of my music was – entertaining things to listen to on the Walkman. Now it’s cool that other people are into it and it’s somebody else’s soundtrack too.”
Hatchback’s ‘Colors Of The Sun’ album is released by Lo Recordings in September
Posted by Sell By Dave at 10:43

cool interview... love that bit about people making whatever they want out of his music. very inspiring!